With the action-packed movie, Need for Speed, opening in theaters this Friday…we thought we would conduct a sweepstakes.

We are selecting one lucky winner to receive a Fandango Gift Card to see Need for Speed in any theater and a copy of Need for Speed Rivals for their video game platform. Head over to K1 Speed’s Facebook page to Enter to Win!

ONE (1) Fandango Gift Card good for the value of 2 movie tickets.

ONE (1) copy of Need For Speed Rivals.

*Winner that is selected will receive Need For Speed Rivals for contestant’s choice of gaming platform. 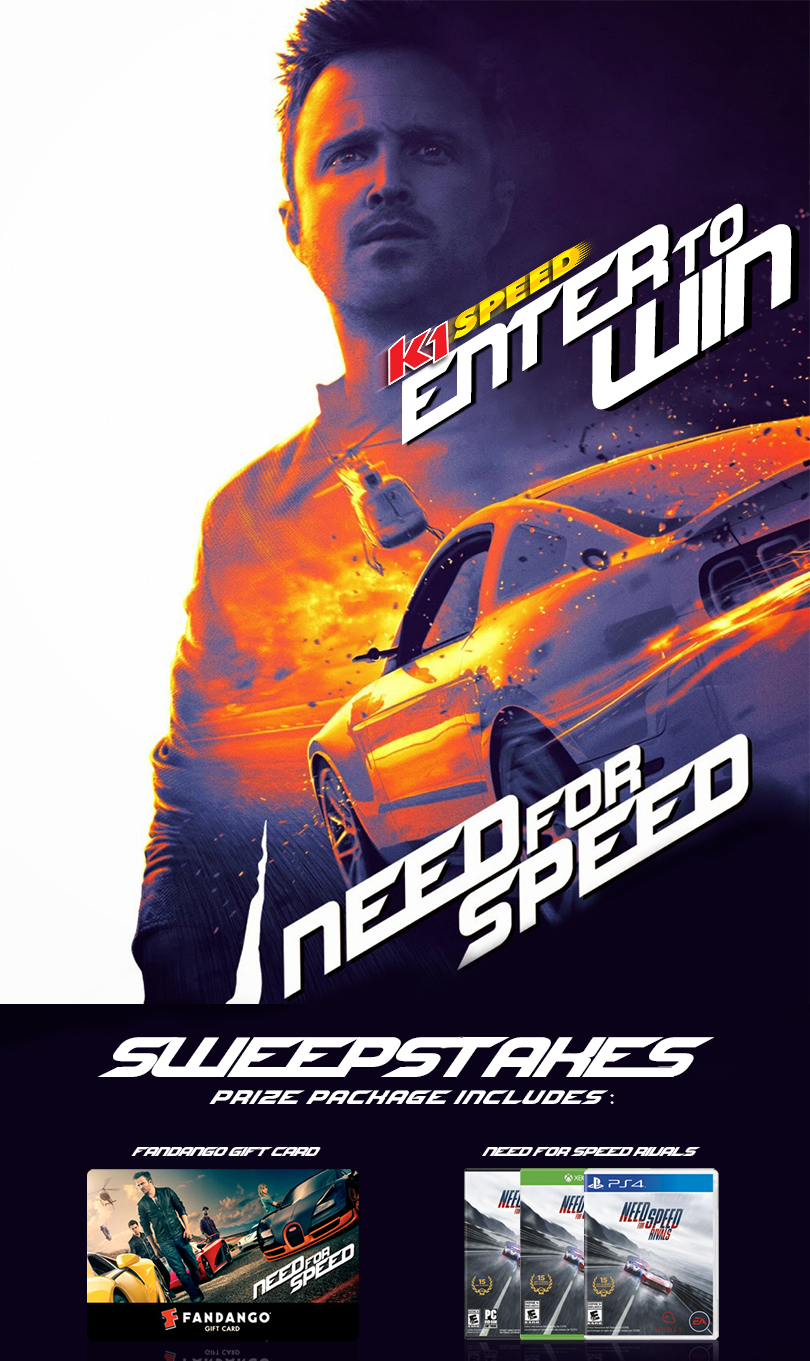 Movie:
Based on the most successful racing video game franchise ever with over 140 million copies sold, DreamWorks Pictures’ “Need for Speed” captures the thrills of the game in a real-world setting. An exciting return to the great car-culture films of the 1960s and ‘70s, when authenticity brought a new level of intensity to the action, “Need for Speed” taps into what makes the American myth of the open road so enticing.

The story chronicles a near-impossible cross-country race against time — one that begins as a mission for revenge, but proves to be one of redemption. In a last attempt to save his struggling garage, blue-collar mechanic Tobey Marshall (Aaron Paul) — who with his team skillfully builds and races muscle cars on the side — reluctantly partners with wealthy, arrogant ex-NASCAR driver Dino Brewster (Dominic Cooper). Just as a major sale to a car broker Julia Bonet (Imogen Poot) looks like it will save the business, a disastrous, unsanctioned race results in Dino framing Tobey for manslaughter.

Two years later and fresh out of prison, Tobey is set on revenge with plans to take down Dino in the high-stakes De Leon race — the Super Bowl of underground racing. To get there in time, Tobey must run a high-octane, action-packed gauntlet, dodging cops coast-to-coast and dealing with fallout from a dangerous bounty Dino put on his car. With his loyal crew and the surprisingly resourceful Julia as allies, Tobey defies odds at every turn and proves that even in the flashy world of exotic supercars, the underdog can still finish first.

Head over to K1 Speed San Diego this weekend to win NEED FOR SPEED items!