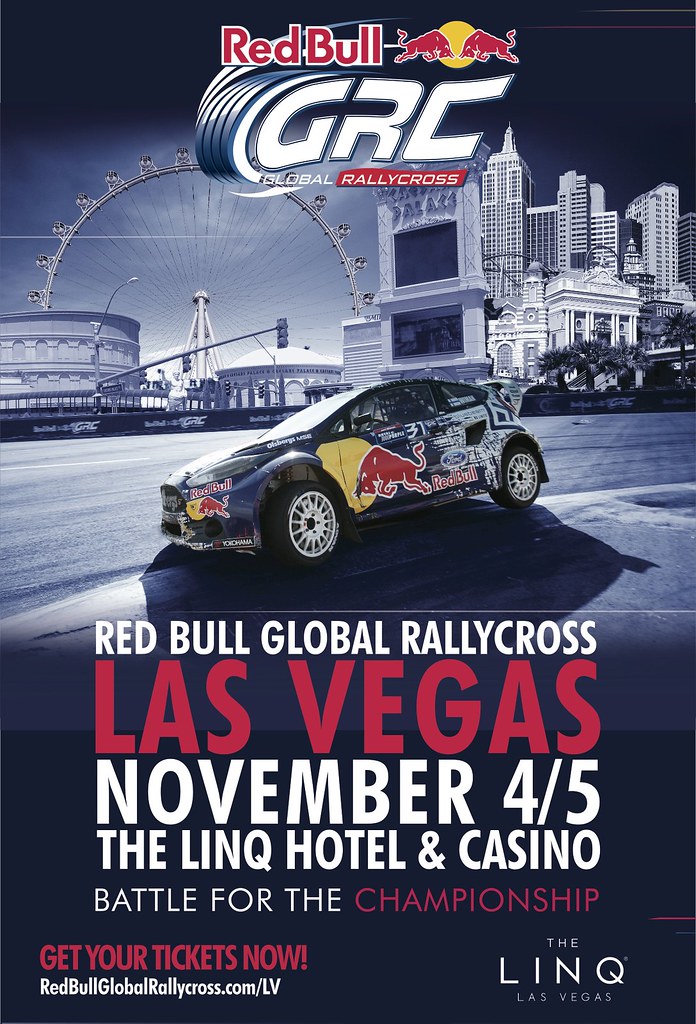 Red Bull Global Rallycross will return to Las Vegas for its season finale for the third consecutive year, hosting Red Bull Global Rallycross Las Vegas at The LINQ Promenade on November 4-5. Held in partnership with Caesars Entertainment which is the host venue, presenting sponsor, and partner of the event, the action will take place at the LINQ Hotel & Casino during the annual SEMA Show, the premier automotive specialty products trade show in the world.

For the first time in series history, four drivers enter the finale with a chance at the championship: Ken Block, winner of the 2013 Las Vegas race, former Formula 1 stars Scott Speed and Nelson Piquet Jr., and defending GRC Lites champion Joni Wiman. The four championship-eligible drivers have combined for four victories, 16 podiums, and eight poles so far in 2014. All four drivers are within 30 points of one another entering the final race, meaning that the best finisher among them in Las Vegas will likely take home the season-long championship.

“Caesars Entertainment Corporation has a rich history of promoting motorsport events in Las Vegas, and we’re proud to become a part of that heritage,” said Red Bull GRC CEO Colin Dyne. “From Formula 1 to Evel Knievel’s fountain jump, Caesars represents the gold standard for event promotion in the city. We are greatly looking forward to ending our 2014 season on a high note with our first event at The LINQ.”

The parking lot adjacent to The LINQ Promenade and at the base of the High Roller – the world’s tallest observation wheel – will be transformed into a high-octane motorsports playground, featuring dirt, asphalt and tabletop jumps signature to the series. Specific track layout information will be released in the coming weeks.
For tickets to Red Bull Global Rallycross Las Vegas at The LINQ, head to http://www.redbullglobalrallycross.com/LV. The race will be broadcast on NBC on Sunday, November 16, at 1:30PM ET.

About Red Bull Global Rallycross
Designed to produce the fastest and most exciting racing in motorsports, Red Bull Global Rallycross pits small production-based cars against each other in door-to-door racing featuring dirt, asphalt, and table-top jumps. With enhanced engineering and safety features, the cars produce 600 horsepower and can accelerate from 0-60 miles per hour in less than two seconds, and can also withstand 70-foot jumps and other vehicle contact. For more information visit www.RedBullGlobalRallycross.com.

About The LINQ and High Roller
Caesars Entertainment is redefining the iconic Las Vegas skyline with The LINQ Promenade, an open-air shopping, dining and entertainment district, anchored by the world’s tallest observation wheel, the Las Vegas High Roller. Named as the “Best thing to do on the perfect weekend getaway in Las Vegas” by Condé Nast Traveler, The LINQ Promenade and High Roller features more than 30 unique retail, dining and entertainment venues and plays host to a variety of special events, festivals and more. Located at the heart of the world-famous Las Vegas Strip, the 550-foot tall High Roller, recently voted as one the top places to take a selfie by Travel + Leisure, is the focal point of the unique urban entertainment district and has proven to be a top location to spot celebrities. The wheel’s 28 glass-enclosed cabins feature an interactive experience including video and music that fade away to unveil spectacular views of the famed resort city in the 30 minutes it takes to complete one full revolution. Each cabin accommodates up to 40 people. Cabins are available for individual or group experiences. For more information, visit The Linq.