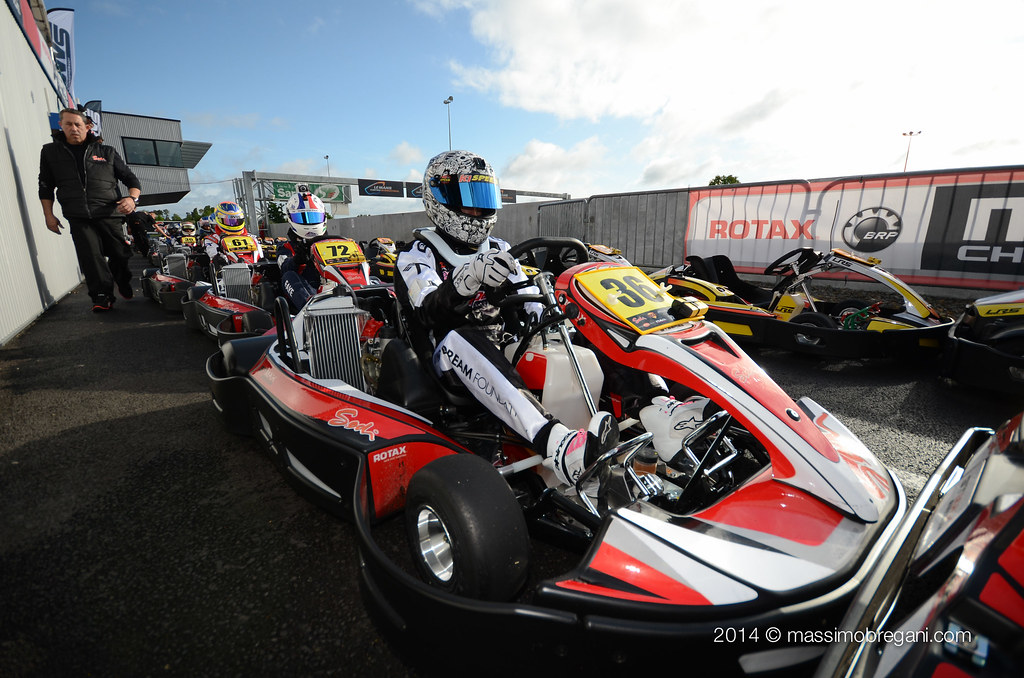 At 23, the southern California native driver KC Cook’s karting career is accelerating rapidly and taking him global. Cook began his racing career only four short years ago but in that time has claimed major titles and made a name for himself on and off the track. KC “The Chef” Cook holds major promise for the rest of the 2014 season and the years to follow.
Born in Long Beach, CA, KC Cook began karting at K1 Speed Indoor Karting facility in April 2010. Competing in just about every Challenge GP League Championship in Southern California. Looking to progress quickly, he sought out the renowned Calspeed Karting, known to hold the world’s largest Arrive and Drive Series. With a talent pool so deep, one could definitely say the competition to earn a spot at the Sodi world Finals was challenging. With sold-out races at 120 drivers each month, 40+ kart Fleet, and over 10 different track layouts throughout the year, Calspeed attracts a wide range of ability from all over the country. After claiming a Rookie of the Year title in 2012, the results of his sophomore season in 2013 earned him a spot in the 2014 Sodi World Finals. 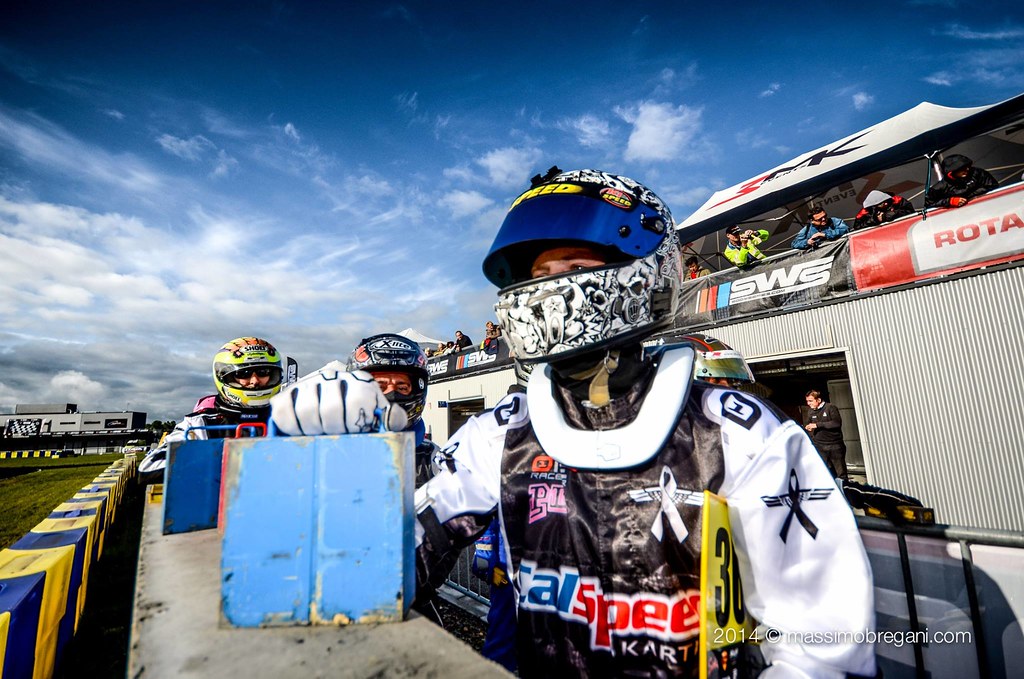 Receiving the invite only three months prior to the race, Cook was happily surprised but knew he was going to have to make moves quickly in order to make this international dream, a reality. Knowing he couldn’t let this opportunity pass him by, he worked hard to save money and continue to demonstrate his ability on the track at Calspeed. With growing awareness of the event circulating the grid and Cook confirming his talents with podium appearances, family, friends, and fans offered their support and sponsorship. With so many donations being presented, Cook opened a crowd funding site where he could collect and advertise his Sodi World Final Opportunity. Sharing event information and his enthusiasm via media accounts, Cook was successful in obtaining enough sponsorship, donations, and equipment to travel across the globe and represent the United States of America at the World Finals.

From arrival to departure, the trip was a total of seven days. Cook arrived early in Paris, France and headed straight to the sights making the most of this opportunity to tour the country. After visiting major tourist sites, the Eiffel Tower, Church of Notre Dame, and the famous Louvre museum, KC Cook headed south to Le Mans, France. Finally able to catch his breath, he made way to his hotel, barely two miles away from the Le Mans Karting Track and settled in, preparing for the weekend with lots of rest.

The following day, Cook weighed in and registered in the Sprint Cup Series alongside 80+ other drivers; each considered the best Arrive and Drive racers from their respected country. Registration day fulfilled expectations and heightened Cook’s adrenaline and hopes, for the racing to come. A driver’s meeting concluded the day where racers were informed of the track format, procedures, and rules. The race format consisted of two heat races held on Friday, one heat race on Saturday and then a Superfinal to follow. 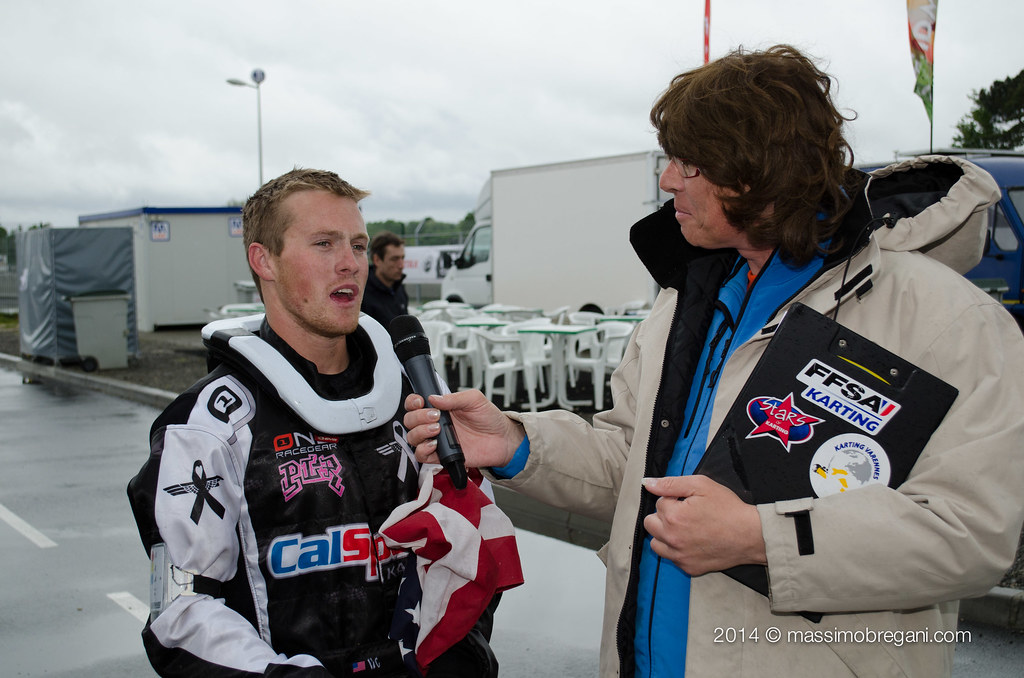 The Sodi World Finals day one began with two practice sessions, allowing racers to become better acquainted with the karts and the track layout. Cook quickly assessed and dominated both sessions, posting a qualifying time good enough to earn him a third place position in his first heat race. Fighting some handling issues, having trouble maintaining his position throughout the race, Cook was able to post a Top 15 finish. The second heat challenged Cook’s efforts with a 12th position start. By the first corner, Cook gained momentum moving up to fifth position and soon after claimed third position in the next few corners to follow. After holding third for most of the race, Cook experienced crucial braking problems resulting in a stalled kart with only two laps to go. Luckily he held it together, finishing just inside the Top 15 once again. Day one ended with Cook finishing inside the Top 20 in points. 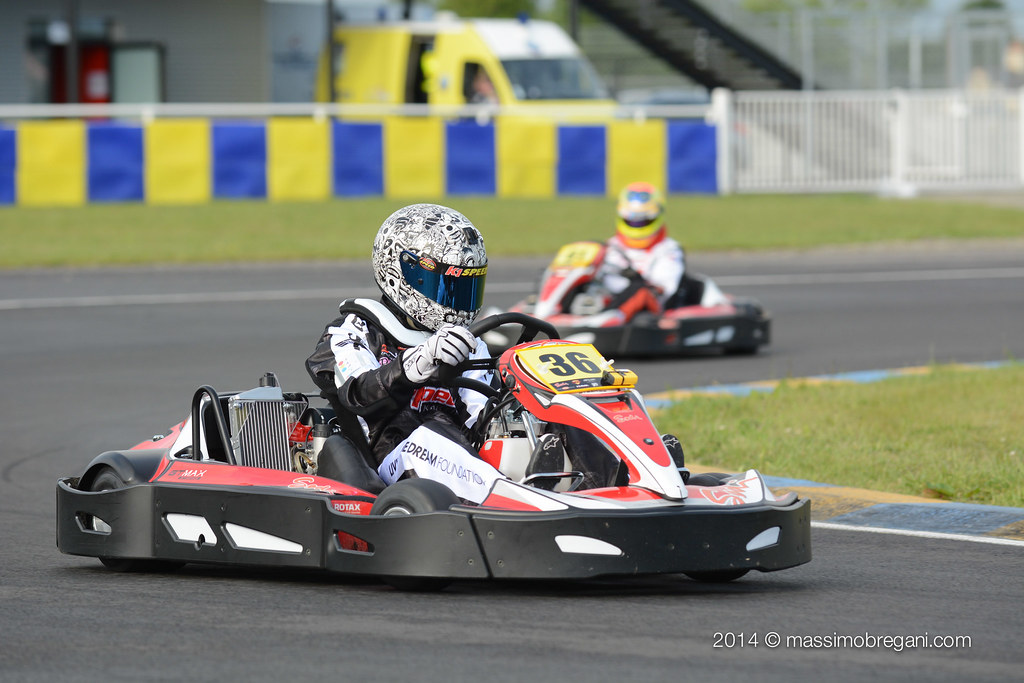 Going into Day two, KC Cook held his cool composure, remembering to still have fun while racing and getting the most of his international experience. Despite his efforts to remain relaxed and collected, unfamiliar territory materialized as rain began to pour and alter track conditions. While his European competitors simply changed into rain equipment, Cook stared in awe at the quickly shifting slick track. With zero experience on a wet track, Cook geared up for a day that he knew would either tribute his talents or display his limitations. With no practice sessions scheduled for the day, qualifying became a major learning opportunity to reassess the track and relearn the corners. The qualifying session of the final day proved itself especially challenging as Cook blew through many of the first corners and slowly adjusted his line to the wet track. Nearing the end of the session, he was finally able to settle the kart and drive through the rain but it wasn’t enough to pull him to the top of the leaderboard. Cook qualified 50th but gained indispensable knowledge and experience in the rain. Proving his ability to adapt quickly to any conditions, Cook ends up prevailing. Cook’s qualifying efforts end him up in pole position in his respected, final heat race. Off to a great start and widening the gap almost immediately, Cook gained momentum through the first corners. With the rain heavily still playing a factor and a growing hunger for victory on the track, the gap closed, tires rubbed briefly and forced Cook off track, but recovers back to third where he remained untouchable until the finish. Earning a spot on the podium, receiving his first hardware on International grounds. With less than an hour’s worth of experience karting in the rain, Cook was ready to make moves in his Superfinal. Starting in 6th place, Cook hung back early on and waited patiently for the front of the pack madness to settle before strategically making his way up three positions into third. With first place widening the gap quickly, Cook tried to work together with second place to catch up. The slick track continued to test driver abilities as second place spun off track right in front of Cook, barely missing him. Leaving Cook alone to catch the leader. Keeping his concentration and hitting all his marks on track, just wasn’t enough. KC Cook held it together for a second place finish in the Superfinal for Team USA in Le Mans, France. The overall Championship points haul reflected a tough 40th position due to the rain and point’s format, but the experience and knowledge acquired throughout both days was a first place undertaking. 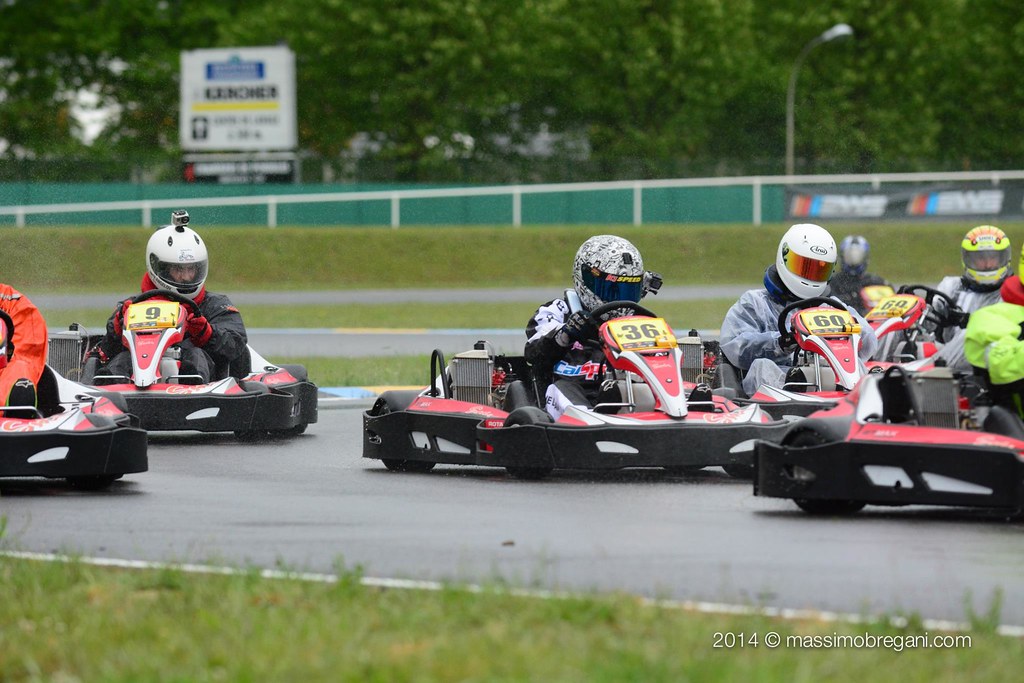 KC Cook returned to the United States with two pieces of hardware, one for his third place, heat race achievement and one for his well-deserved second place battle in the Superfinal. The entire weekend allowed Cook to showcase his talents and also be humbled by unannounced conditions. The karting knowledge he brought with him to France grew immensely by what he was confronted with in Le Mans. New track, pouring rain, and language barriers were presented in a very short span of time, nevertheless Cook proved his determination and will to prevail in the face of any adversity. Closing the day with a lavish ceremony and banquet, the Sodi World Finals sent KC Cook home with wonderful memories, unparalleled knowledge, and not one, but two trophies. From this experience, Cook has vowed an appreciation for other cultures and also a respect for other driver’s talents and styles. Given the opportunity again in 2015, Cook could really shake things up in France, as drivers from around the world would have a now rain experienced talent to look out for. 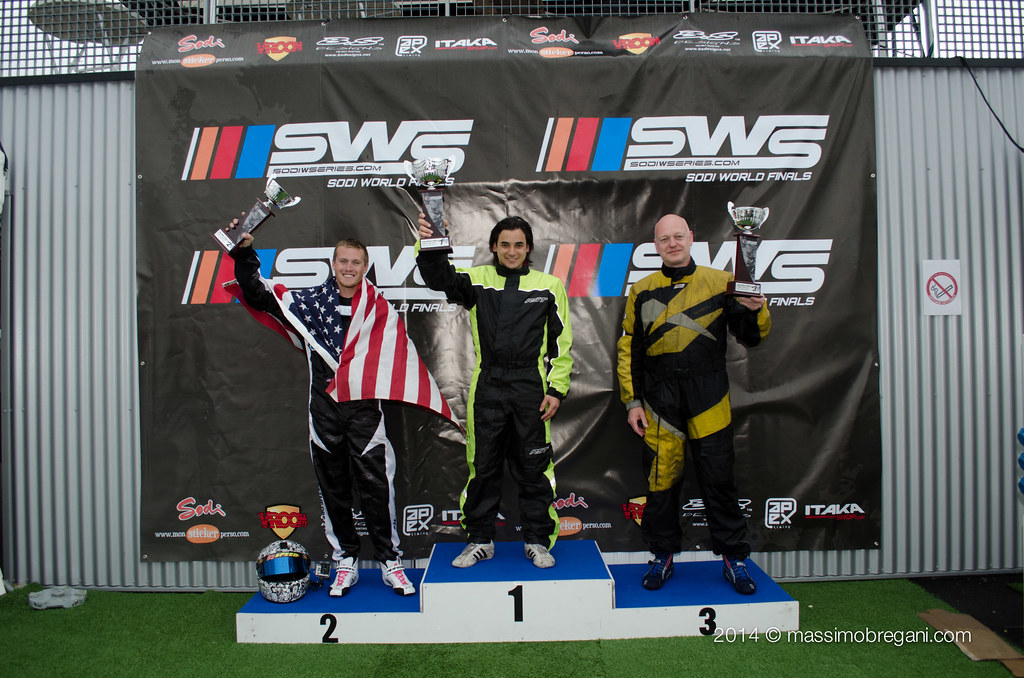 KC Cook is currently competing in Southern California’s Los Angeles Karting Championship in the PRD Senior Pilot Class. With 4 rounds downs, Cook has claimed two wins, and leading the point’s championship. Cook has mentioned his next steps in racing, but needs to be mindful of where he places his finances. Making sure he competes in a series that will serve him well, experiencing the best driving techniques, the purest talent out there, and in a series that will get Cook noticed and progress his career rapidly. Having access to resources out at Irwindale Speedway in Irwindale, CA, in the heart of So Cal. Cook may try to pursue a few NASCAR Whelen Series races in the SRL S2 series, and hit 2015 hard in hopes of the Championship. Also possibly participating in a full Shifter Kart season at LAKC this coming 2015 if everything goes according. Cook holds big promise in the future, keep an eye out for this kid.