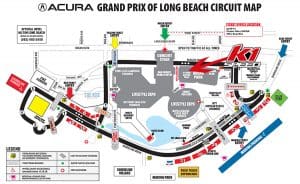 Be sure to join us for the 45th running of the Acura Grand Prix of Long Beach this weekend, April 12-14, 2019. Since we’re a primary sponsor of this legendary event, you’ll be seeing plenty of us around the circuit. So if you’re looking for things to do, be sure to stop by our booth in the Lifestyle Expo, where we’ll be handing out some free swag to our fans!

And you’ve definitely got to check out our outdoor kart track located on the top floor of the parking garage in the Welcome Plaza.  We always get the itch to race when watching the pros out on circuit, and with our on-site track you won’t have to go far to scratch that racing itch. This outdoor track’s only around these three days of the year and is the perfect way for racers 4’10” or taller to experience the same adrenaline rush the pros are experiencing right near you! And with a race purchase, you’ll receive a free souvenir headsock to take home.

Plus, we’ll have an exclusive VIP Lounge at the outdoor track JUST for current K1 Speed members! Simply show your K1 Speed membership card, and you’ll get access. We’re going to have a live DJ, complimentary RedBull and waters, and K1 Speed swag!*

Don’t be a stranger during the Acura Grand Prix of Long Beach – come visit and say hello! We love meeting with all of our fans and we can’t wait to bring a little K1 to your weekend.