Formula E takes the press to the heart of electric racing

For the vast majority of professional racing drivers, their first experience of wheel-to-wheel action came in karting.

Its place as a proving ground for future world champions is unmatched, and the sheer amount of races that take place during an event, let alone a season, means that even the most experienced of drivers have done more laps in a kart than in any other type of racing machine.

And because of this, they all know they’re pretty good at it. When you get a group of them together – no matter how much fun the premise of the occasion is supposed to be – it all becomes deadly serious when the visors come down and the green flag waves.

For a few years, electric karting has been gathering in popularity. The lack of noise and emissions means that these tracks can be in places that traditional fossil-fueled karts wouldn’t be allowed.

To add a bit of drama to the occasion, seven members of the media were invited to pair up with the Formula E stars, while the format of the event was tailored so the press would get to experience a bit of what it’s like to take part in a Formula E event.

The pros went out first to sample the short, sweeping circuit, and almost instantly they were into battle mode, remodelling the track as they clipped the barriers, straightening out the corners wherever possible.

Speed was in hilarious form, showboating by waving his feet and arms in the air as he overtook Piquet.

“Did you think it was too much?” he questioned as the session closed.

“Your car has fresh front tyres!” da Costa observed, showing that his sense of humour extends well beyond his April Fools injury tweet that some individuals who shall remain nameless fell for hook, line and sinker!

The media were given a double-length practice session, which included a car swap midway through so they could get a feeling for how Formula E’s unique pitstop routine works.

During this session, the drivers unanimously decided that rather than do the qualifying themselves, the media should set the times that formed the grid instead. Kristin Henley of FOX Sports was the main man, setting a great time to put team-mate da Costa on pole.

With the EJ on his raptor acting as the safety car, the race got underway with da Costa leading the rolling start. D’Ambrosio was hot on his heels, while further back all hell was letting loose as the drivers went three abreast, forcing the barriers to accommodate them in the process.

The drivers filed into the pits to hand over to their media team-mates. It was clear that Senna’s team-mate, Fox Latam presenter Juan Fossaroli was the quickest, passing his rivals left, right and centre.

Anyway, having had their fun, the press handed back to the pros for a final dash to the flag. D’Ambrosio quickly worked his way to the front and stayed there, but there was an epic battle behind as da Costa, Chandhok and Alguersuari diced.

The Virgin Racing driver ultimately ended up in the barrier as Senna nipped in to claim third. The top three pairings took to the podium where they received their Michelin cap, bottle of Mumm champagne and trophy.

“I think it was a great experience for the journalists,” said D’Ambrosio, who was partnered by Manfred Poschrieder of the BMW Group. “Obviously the Formula E car is a lot more in terms of power and grip, but the instant torque and how the power is delivered is the same. I saw how Scott Speed went in the last ePrix after winning the paddle board race in Miami so I was determined to win the kart race here!” 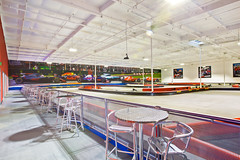 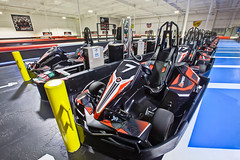 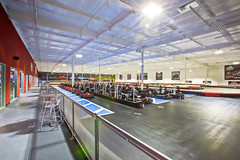 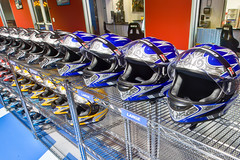 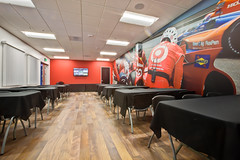 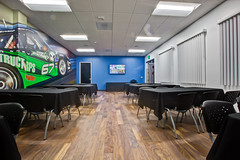 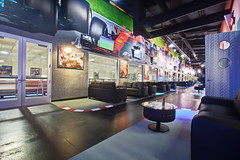 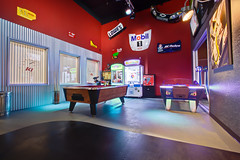 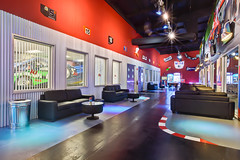