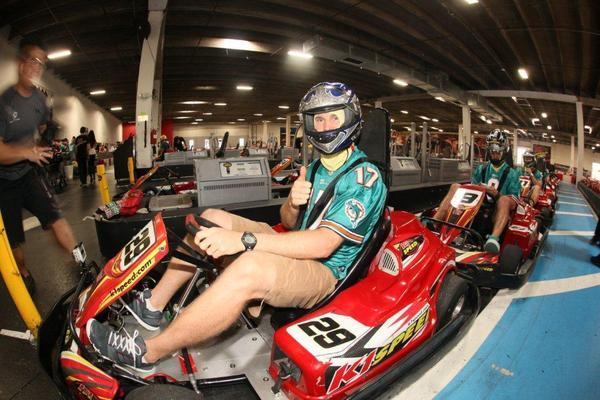 Instead of football helmets, more than 30 Miami Dolphins players donned racing helmets at K1 Speed Fort Lauderdale for an afternoon of go-kart racing with foster teenagers aging out of the program today.

All of the kids were chosen to participate by representatives of HANDY, Inc., the organization responsible for placing them in foster homes and providing a nurturing environment for those still waiting. This was a chance for these teenagers to zip around the track with some of their idols and have some fun at the same time.

“I saw this go up on the board last week about an opportunity to race go-karts with the kids and it immediately sparked my interest so I knew I was going to be here,” said quarterback Ryan Tannehill, who showed up with his wife, Lauren. “Some of these kids have tough decisions and just to be able to go out and have some fun, do something different and something that we can both enjoy but neither one of us is a professional at was a good time.”