There are a few spots available for the Dnt txt n drV Celebrity Karting Enduro this Weekend!

BOCA RATON, FLA. (August 27, 2014) – MAZDA factory professional autoracing driver Tristan Nunez is going back to his roots as he hosts his inaugural Dnt txt n drV Celebrity Karting Enduro to benefit The Dnt Txt N drV Foundation. The event will raise funds and awareness on distracted driving and will take place on Sept. 27, 2014, at the newly opened Miami Location of K1 Speed. 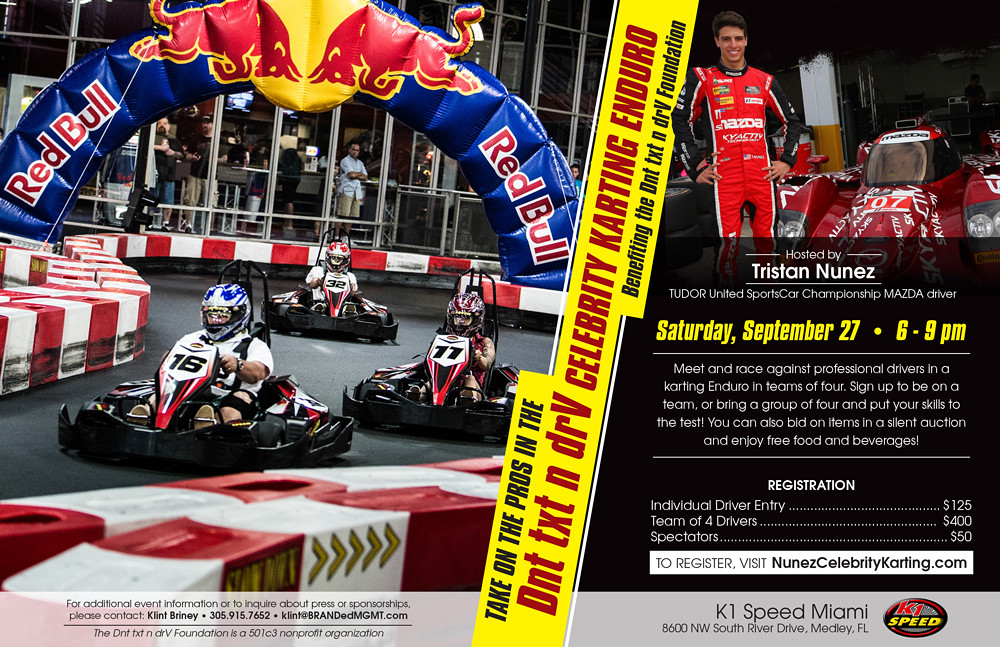 “I’m super stoked to get my foundation off the ground and a charity endurance karting event at K1 Speed in Miami is the perfect way to do that,” said Nunez. “It’s hard to pass up time in a go-kart and given all the other professional racecar drivers that will be joining us for the fundraiser, this is sure to be a very successful event!”

The first annual Dnt txt n drV Celebrity Karting Enduro is another way to keep the awareness going on the dangers of distracted driving. Through this event, funds will be raised in order to help keep teens informed and to prevent individuals from partaking in texting and driving as well as offering scholarship programs to others working to spread the word.

The event will be a combination of a karting competition and silent auction. For the karting competition, there will be up to ten teams with four to a team. The teams will compete against one another in the race where each member will do a number of laps before trading off to the next team member to take over driving. The silent auction will include items such as signed memorabilia, tickets to sporting events, and autographed items by professional athletes and celebrities.

ABOUT TRISTAN NUNEZ:
Tristan Nunez is an 18-year-old professional autoracing driver who competes in the TUDOR United SportsCar Championship Series as a MAZDA factory driver for SpeedSource. Nunez became the youngest class winner in GRAND-AM and American Le Mans Series history in 2013 and became the youngest SportsCar champion in 2012 when he captured the Cooper Tires Prototype Lites powered by Mazda Series championship. Born to a now-retired professional tennis player, Nunez ventured from the family business and began his racing career at the age of 11, despite his twin brother continuing to pursue tennis. Tristan advanced his career with multiple karting championships and then transitioned into the Skip Barber formula cars, where he was named 2010 Rookie of the Year in the Skip Barber Southern Series and won the Skip Barber Summer Series overall points championship. The teen also won the 2012 Team USA Scholarship, going on to win the Walter Hayes Trophy at Silverstone, and was named by Sports Illustrated as a “Face in the Crowd”. The young Floridian stays active on and off the racetrack as the face of his Dnt txt n drV Foundation, where he serves as an advocate to spread the word on the dangers of distracted driving. For more information, please visit http://www.tristannunez.com, http://www.DnttxtndrVFoundation.org, http://www.twitter.com/tristannunez, or http://www.facebook.com/TristanNunezRacing.