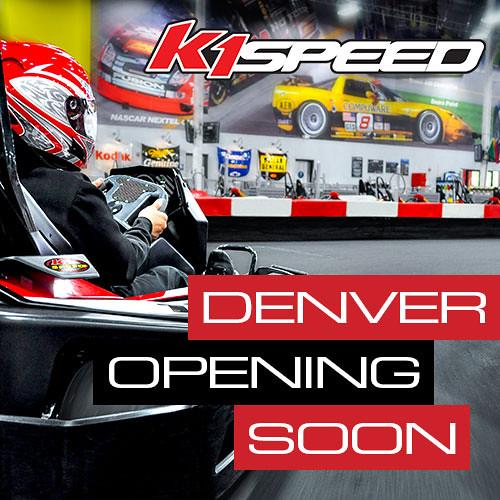 Irvine, CA July 1, 2014 – K1 Speed is the largest karting company in the country, with dozens of locations throughout the United States, from South Florida to the Pacific Northwest. Since its founding in 2003, K1 Speed has hosted hundreds of thousands of racers at its karting centers. This success has helped drive unprecedented growth in the last two years, and the company shows no signs of slowing down. The latest K1 Speed facility will be opened in the Mile-High City, situated in Highlands Ranch and Littleton – Denver, Colorado.

Karting Uniquely Suited for Denver’s Climate
K1 Speed and Denver make such a great pair that it’s a wonder Denver wasn’t host to the first K1 Speed location! Why? Well, it comes down to a couple of factors:

• Weather – Denver is known for weather that runs the gamut of conditions, from searing heat to blistering cold. There’s a saying in Colorado; “If you don’t like the weather, wait five minutes.” And yet, for individuals eager to race at K1 Speed, the weather will be the last of their concerns, as each and every K1 Speed facility in entirely enclosed.
• Altitude – Anyone who has ever been to the Mile High City knows that the altitude can play tricks on your body. Even walking up a flight of stairs can leave you out of breath.

This same lack of oxygen that affects people also affects engines, especially small engines like those used in go-karts. At K1 Speed, however, this altitude won’t play a role, as the company exclusively uses all-electric go-karts for superior performance.

Put simply, the elements at play that make go-kart racing and Denver strange bedfellows have been accounted for. In fact, K1 Speed Denver will be open seven days a week, 364 days a year, regardless of weather conditions. And racers will never experience a lack of power due to altitude! The karts at K1 Speed Denver – a mile up – are just as quick as they are at K1 Speed Miami!

Race Day or Night, Rain or Shine – No Reservations Required
Racers at K1 Speed have a number of options. One of the most popular is K1 Speed’s Arrive & Drive races. Individuals can join an Arrive & Drive race on a first-come, first-served basis, no reservation required. Up to 12 competitors at a time – friends, family and strangers alike – compete in a race against the clock. The winner of the race is not who crosses the finish line first, but rather who manages to set the fastest lap within the allotted number of laps. By crowning a winner based on time rather than position, the Arrive & Drive race eliminates variables which could work in one person’s favor at the cost of another’s, such as starting position or defensive driving from other competitors.
The company also offers a number of race packages which can be reserved, perfect for parties of 8 or more people. These packages, which include reserved race times and exclusive use of the track during heats, are great for birthday and bachelor parties, corporate events, team building exercises, and special occasions. To further tailor these events around each party’s needs, K1 Speed also offers private room rentals and catering options. No matter a group’s needs or wishes, K1 Speed will work tirelessly to help make sure the experience is a pleasant and memorable one.